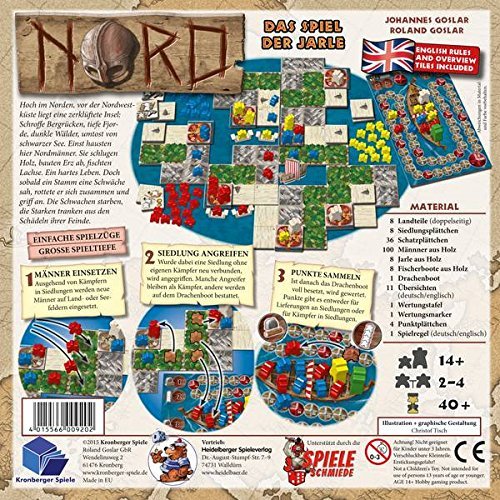 PLEASE NOTE: This game is in English and MAY NOT contain a translation into your language. Far to the north, off the northwest coast lies a cliff-ringed island:Rugged mountain ridges, deep fjords, dark forests, surrounded by black waters.Long ago, the Northmen lived here. As workers, they lumbered wood, hunted salmon,and mined for ore. A hard life. As soon as they saw a weakness, though,the tribe banded together, attacking the next settlement over. Some died,the surviving warriors stand fast und challenged the old jarls.In Nord, each player leads a clan, ordering workers and fishermen, performing attacks, uniting settlements, and providing their fighters with raw materials and food. Each player starts with one jarl and one warrior in a settlement, and a typical game turn takes up to three steps:Place New Workers: A player places up to three workers in one land area or up to two with boats on the sea.Attack a Settlement: If two enemy settlements are now connected by the new workers, a raid starts; the player’s northmen in the connection attack, some die, some invade victorious, some return with the spoils of war.Score Points: If the dragon boat is filled with dead northmen, the next scoring is triggered. When resources are scored players get points for having men delivering wood and iron to their warriors. These are scored in the warriors scoring where some might not survive the winter when not enough food is provided. Alternatively a player might, if he feels strong enough, duel a foreign jarl to receive points of glory.The game ends after the fourth scoring with a final scoring of treasures that the players hoarded throughout the game. The player with the most points wins.